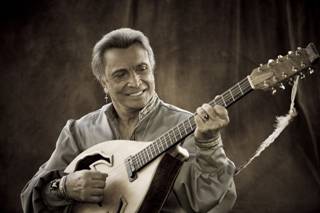 Last summer, America marked the 40th anniversary of the legendary Woodstock Festival. The event earned tons of media coverage and spawned a small cottage industry of nostalgic books. But musically, there was a lot more to 1969 than the artists that played on the farm in upstate New York that year.

’69 was also the year of Song of a Gypsy, a glorious, trippy and romantic piece of psychedelic musical history by Damon The Gypsy, a singer/songwriter who reflected the era of peace and love, not hate but Haight—as in Haight-Ashbury.

Forty years beyond its initial release on LP, and 20 years after it first sold thousands after it came out on CD, Damon is introducing Song of a Gypsy to a whole new generation with a new ‘VHD’ version re-mastered by John Vestman, a 30 year veteran engineer who has worked on projects by Sting, George Duke, Hole and Teena Marie, among others.

It’s a unique piece of history, not only because it so perfectly speaks to the “gypsy soul” in all of us but because it is all about truth, in an earthy way; simple yet professional and personal. It’s the ‘60s experience viewed through the kaleidoscope eyes of a true musical vet of the era—one who came upon his modal, sitar like acoustic guitar sound by chance one night in Big Sur, California jamming with none other than Ravi Shankar and George Harrison.

His music comes from that unique time and place but don’t start getting the idea that Damon was a hippie—he was and always has been a gypsy. There is a difference. He was in their world but not of it. He understood that love could not be understood. He saw free love as empty sex. Not love at all. Drugs? They took us from reality. The problem with drugs is the law of gravity. He saw it the way Blood, Sweat & Tears did: “What goes up, must come down” like a “Spinning Wheel.”

“Sure, I used drugs in the ‘60s, we all did,” he says. “But that didn’t make me one of them. They thought sex was love, but it’s not. The hippies protested the war, I didn’t. They spoke peace and love, and I didn’t. I lived it to the degree I could. However, I couldn’t turn the other cheek—but that’s another story. Love, sure, that’s what it’s all about. And yes, sex can be a big part of love, but sex ain’t love. The hippies spoke love and lived sex—sex, drugs and rock and roll. But this wasn’t me at all.”

Halfway between its initial 1969 pressing of 500 LPs and today, Song of a Gypsy experienced a fascinating renaissance via pure serendipity. Story has it that a Canadian disc jockey was combing through a stack of 45s at a swap meet and came upon a record that had the symbol of an Ankh, the Egyptian hieroglyphic that meant “eternal life.” He figured for 25 cents, how could he go wrong? Later that day, he listened to the record and was blown away. The straight forward simplicity of the lyrics, the mystical, hypnotic sound, with a Middle Eastern influence and rock & roll undergirding had an immediate effect on him. It’s probably the same magic that captured the execs at United Artists that were about to release the album on their label until they were fired (see, A&R was a tenuous job back then too!).

Soon the news spread and Damon the Gypsy became a bit of an underground legend.  As awareness of his music began to snowball, Damon’s music rose from 25 cents per recording up to as high as $3,000 on eBay. Song of a Gypsy remains one of the most sought after vinyls of its time, with “The Goldmine Price Guide to Rare and Collectible Record Albums” listing it at over $3,000.

“It died and then like The Phoenix, it rose from its own ashes,” Damon says. “People started making pirated copies of it and eventually the demand was big enough so that I put it out the original version on CD. I think it has a haunting hypnotic flavor that just grabs people and they enjoy tripping and grooving to it. My words are very simple and tell a very direct story about a quest for love. People tend not just to hear the music but feel it. The unique mixture of my voice and Charlie Carey’s Santana-like electric guitar weaving in and out of my modal one tone acoustic guitar is very unique.

“Nobody is doing anything like that today,” he continues, “and it really is a part of its special time and place. On a more personal level, the music taps into my status as what my name spells backwards, which is “nomad.” My whole life has been a magic bandwagon and I think fans like the fact that it’s grounded in that Northern California sound but also has that Middle Eastern scale and percussion instruments like hand drums and finger cymbals.”

A little time travel is in order to fully understand how Damon first came upon the modal guitar sound that came to define the artistry he brought to Song of a Gypsy and its 1999 sequel Gypsy Eyes-another work that blended the joyful sounds of the psychedelic era with real life experience and wisdom. In 1967, Damon, a Los Angeles club singer and card carrying member of Local #47, was hanging out playing his guitar on the lawn of Esalen, a retreat for rich folks with hot springs that we might now know as a “spa”; the manager was an old high school friend who invited him up. On the day one of his strings broke, Ravi Shankar and George Harrison helicoptered in for the night.

“That evening, everyone was in the cafeteria jamming and banging on instruments like they always did and I started detuning my guitar with its five remaining strings. It started sounding like a sitar with a modal tone that droned and didn’t change keys, but embellished the middle of the key. It fit in perfectly when Ravi and George started playing. Inspired by the Biblical story of David who played a 10 stringed instrument, I later switched to a 12 string and took two off to achieve the same effect. The modal vibe stuck with me and became an intrinsic part of my sound.”

At its heart, Song of a Gypsy is about Damon’s search for love and an ongoing passion for a mysterious girl named Genie, as in “Poor Poor Genie,” the album’s second track. “It was my reaching out through music to let others know they’re not alone, and there are more of us out there with ‘gypsy souls’ and the same sensitivity in regards to love and its depth,” Damon says.

Song of a Gypsy’s titles all touch on different feelings about this Genie. He asks, “Don’t You Feel Me” and “Did You Ever” think that I would fall in love with you? Listening to the dirty, hard grooving, deep down “Funky Funky Blues” helps take his mind off his troubles, but later he wonders, “Do You” dream about love and happiness? On “The Night” he and Genie finally get together, he declares “I Feel Your Love” and his heart soars like an eagle on “Birds Fly So High.” On Song of a Gypsy’s final track, “The Road Of Life,” he looks back on this extraordinary romance and says, “As each day comes to pass and my body comes to rest, my heart, my mind, my soul goes on living for the best.”

Over the years, Damon has performed everywhere from his home base of Southern California to Amsterdam, Greece and Spain, where he played 14 cities in 16 days a few years ago. With the HD release of Song of a Gypsy, he is looking forward to hitting the road again. He is also currently working on a third album to complete the “gypsy” trilogy.

“The lot of the gypsy symbolizes each one of us as we wander the paths of our lives,” he says. “The album may even have some answers for those of you who are endowed with gypsy souls, seekers of love and truth. Listening to these melodies from beginning to end may just leave you in a place of new understanding of love and life itself. I’m excited to once again bring people along on my journey.”