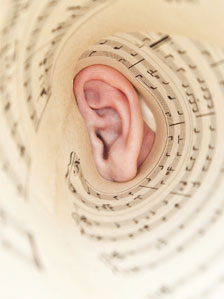 When I see “earworm” my first thought is Star Trek and that thing crawling towards Chekov’s ear in The Wrath of Khan. That isn’t really a worm it is a Ceti eel but just as gross. Once past that thought my mind goes to a woman Untold Stories of the ER and the pet worms she had living under her skin packed with dirt.

BUT! Thankfully an “earworm” is a gross little creature working it’s way to your brain according to Rhitu Chatterjeev it is,  “It’s just a silly little tune stuck in my head. I have no idea why it popped up this morning. And I just can’t get rid of it. Earworms are like “unwanted or intrusive thoughts,” says Daniel Levitin, a neuroscientist at McGill University in Montreal. ”

Music has a tendency to get stuck in our heads. You know the experience – a tune intrudes on your thoughts and plays, and replays, in a never-ending loop. It happened recently to me. So, as a science reporter, I thought I’d try to find out why.

Several weeks ago, I was at home on a Sunday morning when, for no apparent reason, three words popped into my head – “Funky Cold Medina”.

That’s the name of a song performed by rapper Tone Loc. I’m told it was a hit in the 1990s, but I hadn’t heard it until the night before when a friend sang it at a karaoke bar.

I kept hearing the lyrics – “Cold coolin’ at a bar, and I’m looking for some action. But like Mick Jagger said, I can’t get no satisfaction.”

When the song reappeared in my head, I could hear my friend singing it again and again… and again.

I was stuck with it for nearly a day and a half, before it finally went away.

But it left behind a nagging question. Why do we get songs stuck in our heads in the first place?

Listen to more on this story at PRI’s The World, a co-production of the BBC World Service, Public Radio International, and WGBH in Boston. You’ll also be able to hear what earworms plague people working on the show.

Read the complete story on BBC.com

Crawl In The Bathtub and Slit Your Wrists, Love Songs – In My Veins – Andrew Belle