The Nothing has called Gmork again, and it’s up to Bastian, Atreyu and the luckdragon Falkor to stop it all. 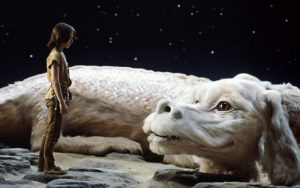 The NeverEnding Story, is a 1984 West German-produced English language fantasy movie based on the Michael Ende  novel of the same name. It is one of the most beloved stories of all time.

Fathom Events and Warner Bros. Entertainment will bring the film to select theaters for a special two day event.

Details from the Fathom Events website is listed below.

Ticketing: Tickets are available by clicking on the orange “Buy Tickets” button. If online ticketing is not available for your location, you can purchase your tickets by visiting the box office at your local participating cinema.

Fathom Events and Warner Bros. Entertainment bring the beloved film, The NeverEnding Story back to select cinemas nationwide for a special two-day event on Sunday, September 4 and Wednesday, September 7.

The NeverEnding Story tells the story of Bastian (Barret Oliver) who, on his way to school one day, ducks into a bookstore to avoid bullies. Sneaking away with a book called “The NeverEnding Story,” Bastian begins reading it in the school attic. The novel is about Fantasia, a fantasy land threatened by “The Nothing,” a darkness that destroys everything it touches. The kingdom needs the help of a human child to survive. When Bastian reads a description of himself in the book, he begins to wonder if Fantasia is real and needs him in order to survive.

With this 1980s fan favorite, audiences will rediscover the magic and mystery as it was meant to be seen on the big screen.

6 thoughts on “The Never Ending Story Returning to Theaters”